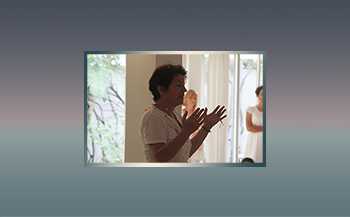 The Sanskrit word Jaya means "Victory, Hail to...". The word Jaya is very often placed before a divinity’s name. The masculine ends with an "a" whereas the feminine is Jayi. Jai is also a derived form.

Used as a Bīja mantra बीज मन्त्र, it is also combined with other mantra or divinities’ or masters’ names to praise them. "Jaya Devī" very often refers to Durgā दुर्गा or to goddesses who represent Śakti शक्ति, the primordial and universal energy.

Here are a few examples:

"Śrī Rām Jaya Rām Jaya Jaya Rām Om" श्री राम जय राम जय जय राम ओम् "Victory and honor to the Lord Rāma" This is the mantra of Hanūmān हनूमान्, the great devotee of Lord Rāma. This famous mantra is known as the Rāma Raksha Maha Mantra. This great mantra ensures Śrī Rāma’s protection for the person who recites it. In its broader meaning, this is the mantra of spiritual devotion to the master who enlightens and protects. "Jai ma" is a common expression that means "Victory to the divine Śakti शक्ति", representing female energy.

"Jai Guru Deva Om": victory to the divine master, this mantra is recited to attain higher consciousness. “Jaya Ganesha", and so on.

Jayaji is the affectionate yet respectful diminutive.

We also find the word Jaya in Ujjayi, the so-called "victorious" Prāṇāyāma प्राणायाम, which combats illness, sorrow and death according to the Haṭhayogapradīpikā हठयोगप्रदीपिका.

Our background in yoga https://www.centrejaya.org/spip.php?article1⟨=fr