« Rely only on yourself »

Here we are together again after a few weeks’ vacation, and it is always a pleasure to see you again, you spiritual seekers, who sit in silence to become witnesses of life again, witnesses of your lives, witnesses of what happens beyond the grasp of your superficial consciousness, which is absorbed by many mundane preoccupations.

The vagaries of life bring us both beautiful and harsh experiences. Loss of a loved one, serious illness, family responsibilities, separations, change in status, move, and so many other events that turn our lives into an obstacle course. The distinctive characteristic of meditative and yogic practices is that they teach you how to stay centered and calm under any circumstances. The ability to face life’s adversity with more calmness than most people is acquired through learning to sit still while controlling body and mind. 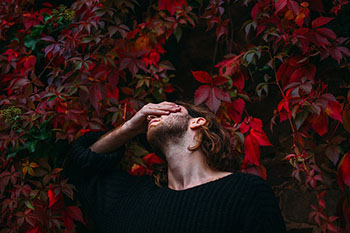 One recognizes a spiritual practitioner not only from his speech and look, but also from the way he reacts in a given situation. Calmness and reflection will always precede reaction, but reflection should be luminous and fast, because an intelligent reaction should immediately follow. A yogi should not be a non-reactive person in a superior position, wrapped up in himself and his asceticism. If this is the case, he will never be able to attain wisdom that is useful to others. His transcendence will enlighten only him. A yogi should be a reactive and social person, before being someone who needs to work on his ultimate transcendence. He should act and shine in the world for the good of most people.

I still remember our master, Sri Sri Sri Satchidananda Yogi सच्चिदानन्द, called "the Silent Yogi", who came to Réunion at the age of 98 for silent seminars. After a ten-hour trip at that time, he didn’t rest and stayed in Padmāsana पद्मासन for six hours without ever complaining and gave Indian presents which he took out of his old suitcase which was closed with a very long rope.

How many times have I observed him looking at you! You who wouldn’t stop moving, who were loud, who talked to your neighbor, who took ages to sit down, who thought too loud. You believed that you saw the master and even, that you saw everything in him. In fact, he was the one seeing in you. Still, stable, established, beyond tiredness and pain. Hopefully, you are not naive enough to believe he was not tired and in pain?

When one thinks about wisdom, images of sages and philosophers of ancient Greece or of Eastern yogis and monks pop up. This is a bit reductive and leaves out ancestral wisdom from many other (African, Amerindian...) traditions around the world. However, we will focus here on Greek and Eastern wisdom for their metaphysical and philosophical legacy.

In ancient wisdom, a sage is supposed to be "an individual who possesses, accomplishes and surpasses the faculties of human nature, both in knowledge and in action. He represents the highest ideal of human life, disposition to knowledge, correctness of judgment and of moral values. He performs the actions that are related to these judgments." He manifests the well-foundedness of his thought through his word and action, his life is in itself the demonstration of his thought. Whether he uses the verb or not, he concretely demonstrates the well-foundedness of his philosophy through action. The lives and deaths of Socrates or Gandhi are an example thereof. Their life’s actions were as important as their speech, if not more.

In India, wisdom is Prajñā प्रज्ञा or transcendental wisdom, the sage is ṛṣi ऋषि. In ancient Greece, a sage, sophos in Greek, is the one who possesses sophia, wisdom. A sage was originally the one who possessed a practical knowledge, that is both skills for a specific work and a concrete wisdom resulting from experience. The notion of philosophy appeared later, when this knowledge turned into a more theoretical and esoteric pursuit. We owe the word "philosopher" to the Pythagorean tradition. Wisdom thus became a way to free the mind from practical concerns. Afterward, a sage was defined by his ability to play a social and political role. Notions of excellence and nobility of the soul, which were previously qualities of well-off people only, were also added to the definition of sage.

In fact, wise men had prominent places in kingdoms, both in Orient and Occident. Even if ascetic practices often go hand in hand with wisdom, all wise men did not practice extreme ascetic techniques. Even if Eastern practices may be more demanding, Western wise men also did retreats, fasts, and body- and mind-controlling practices.

In Western antiquity, sages were mainly thinkers who left behind famous moral aphorisms: "Know thyself". "A clear conscience is the greatest good". "What is man’s greatest bane? His brother man alone". "Who is rich? He who longs for nothing". "Who is poor? The miser". "The more powerful, the less desirous". "To forgive much in others, but nothing in ourselves", and so on.

These moral precepts defined the behavior of the good citizen in everyday life. These aphorisms derived more from practical intelligence than from action based on erudition, but with the development of philosophy, the sage turned into a being with extraordinary abilities.

For Aristotle, a sage should act prudently and demonstrate his wisdom through action. For Plato, a sage should detach from Ideas, experiment and set an example. But a wise man is the one who addresses the question of the essence of reality and of its metaphysical dimension.

The successive philosophical schools of thought offered different points of view (Sophists, Cynics, Stoics, Epicureans...), as did Eastern philosophies in their own religious and social context (cf. Darśana दर्शन).

While addressing the question of gods and men as do Eastern philosophies, Western philosophies mainly offer intellectual speculation as a final tool for understanding and self-positioning. Eastern, especially Indian, philosophies are fundamentally spiritualist. Indian philosophies also offer an intellectual speculation, which sometimes goes in great depth, as in vēdānta वेदांत cf., but their goal is to help make a quantum leap to intuitive and spiritual direct experience. They invite each individual to experiment the transcendence process, beyond intellectual and moral reasoning, a process which takes place on all planes, from the physical to the spiritual. Whether from Orient or Occident, a wise man represents a superior plane of reality. He doesn’t submit himself to common rules that are not based on reason or knowledge.

"Breaking free from our limitations is the beginning of wisdom." In other words, a wise man can be a legislator, a politician, a thinker all at the same time, but he can also become subversive, and even play the role of madman. A madman is the one who is not affected by the laws of the city and of ordinary men. He can be self-sufficient. This independence can be in itself a life choice. Let’s mention Diogenes the Cynic, Greek philosopher (413 - 327 BC), and Ramaṇamaharṣi रमणमहर्षि (1879 - 1950), just to name a few.

We are not far here from yogis with extreme practices, hermits, Sādhu साधु in their particular approach. However, not all Sādhu are wise, some of them are even far from being wise.

A wise man is the one who has managed to heal from the pains of human condition, from suffering. For yogis, all practices are focused on this healing dimension. Greek Stoics also gave a high importance to this aspect of wisdom: changing behaviors to heal human nature.

I won’t go in depth into Indian thought now because I talked to you about it so many times before. I am trying to show you how the concerns of ancient Greece or Eastern sages were a lot like the actual concerns of the wisest among us, confronted with human behavioral changes. Incivility or tyranny of human nature which Seneca or Socrates talked about still exist and didn’t change much in the end.

Today’s ordinary men are not wiser than the non-sages of antiquity, and the scriptures of antique Western or Eastern sages are still very actual in terms of moral and behavioral recommendations. Yogic science has also never been so relevant than today. Indeed, as a practical system of integration of man into the universe, it addresses the need to educate people on the universal laws that govern them and to give them the tools that will alleviate their existential suffering – these issues have remained the same for millenniums. A common view among wise men is that nature is the highest power and the purpose of human life is to stop suffering. The result will be happiness.

As a Stoic, Seneca said the following:

"The mind ought in all cases to be called away from the contemplation of external things to that of itself: let it confide in itself, rejoice in itself, admire its own works; avoid as far as may be those of others, and devote itself to itself; let it not feel losses, and put a good construction even upon misfortunes." But like Plato and Aristotle, he also encouraged us to be unreasonable, that is to exalt our soul. "When [the mind] has scorned everyday and commonplace thoughts and risen aloft on the wings of divine inspiration, only then does it sound a note nobler than mortal voice could utter."

Isn’t this like exaltation in Eastern transcendence? Even if Eastern and Greek wisdom are different, they have one thing in common. "Even if the latter is characterized by an intellectual and moral approach and the former by a devotional or body-energy-mind approach, they both require from a man who longs for wisdom an unwavering will to define his freedom of thought and action. This requires one essential quality: being constant in the quest. The success of a quest of course depends on teachings, guides, masters, but a spiritually advanced man should also know how to rely only on himself. 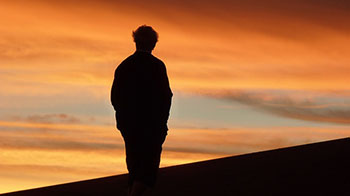 Beyond philosophies and dogmas, once a man who is inspired and inhabited by the quest after the essence of reality has met his Self, Ātman आत्मन्, and has had the intuitive experience of what Is, whether he has expressed it or not, he will know how to rely only on himself. Why? This did not arise out of fate, but because he has finally understood his eternal nature. He can now be confident.

"La tranquillité de l’âme" ("On the tranquility of the mind") by Seneca, Points Editions

Adaptation and comments by Jaya Yogacarya