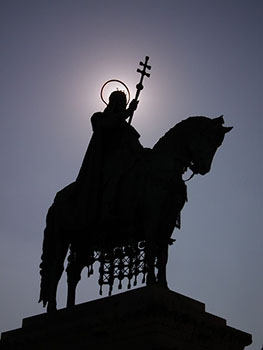 As this is the last conference of the year, we should finish with fundamental concepts. In our quest for elevation and knowledge, we are searching for the transcendence of the gross planes, in order to make the experience, in this one life on Earth, that will bring us the closest to the reality underlying our existence. We know that the ordinary human mind Manas मनस्, the mental, has always been compared to a constantly-moving monkey. This constant agitation is one of the greatest causes of human suffering. In deep sleep, agitation disappears because we let go of everything. In order to understand the essential aspects of our existence, there is reasoning on the one hand, and experience on the other. Regarding reasoning, there is the reasoning that pertains to common sense and is based on reason, and the reasoning that is endless speculation. The latter is sterile and even destructive. If we rely on sound reasoning Sattarka सत्तर्क, we will quickly obtain results, which will enable us to focus on the means.

Therefore, the success of our spiritual search depends on the sound reasoning on which we rely.

So, be wary of low-level metaphysical/philosophical speeches, which may make us doubt the obvious common-sense reality in the long term. When you look at so-called "wise" people, they don’t just earn your respect by their sophisticated way of thinking, but most importantly, by their distinctive simplicity and common sense. Our elderly, our own parents even, may have acquired this common sense from life’s long journey. But this is of course not the case for all the elderly. Many failed to hop on the path to the Self. Those who have successfully moved forward have built their confidence on common sense, sound reasoning. Thus, reasoning should not be an end, but one should find confidence out of reasoning.

This confidence/trust will translate to rewards in life’s experience.

Thanks to common sense, farmers sow and harvest at the right times of the year. Similarly, we should use common sense and clear and sound reasoning to confidently define the true nature of our existence, as well as the true nature of money, of our material quests, of our search for health, love, and so on. During this reasoning, we will necessarily face what is good or bad for us. That is why everyone should define, based on common sense and confidence, what is good for oneself. Once this is done, one should implement the means to attain what is good for oneself. Remember, last time, I said: "Wise people never act in vain! One who acts without considering the potential results of one’s actions and the laws one lives by is a fool."

In order to implement the means, we should not lose ourselves in the twists and turns of reasoning or in the numerous ways our mental minds find to justify themselves while giving up on courage and efforts. Many yoga students in beginner classes make pretty speeches about spirituality and have a great interest towards this spiritual science. A part of them very often and very quickly give in to their mental and physical inertia, reinforced by their numerous self-justifications regarding the actual work they need to do on themselves. Some of them spend their whole life trying to start.

Relying on confidence, the brave man will never be defeated.

He will tap into Icchā Śakti इच्छा शक्ति, the unbreakable will. By making an obstinate effort, the farmer will get his harvest, the salesman his wealth, the king his power, the yogi his beneficial science and supreme understanding. The yoga student who totally lacks self-confidence, and trusts neither the yoga science nor his guide, and who gives in to various and endless reasonings, will never get any results. He is all talk and has a superficial yoga practice. He is not made for yoga! The yoga student who uses the merest failure as a pretext to lose all confidence is a lost man, his own enemy. He is not made for yoga! The yoga student who "takes just to take" yogic keys, like mere recipes, in order to make a career out of them, is an inconsiderate consumer of spirituality whose sole confidence is in his own ego, underestimating the amount of personal commitment necessary for the true spiritual search. He is not made for yoga either! When we take the yogic path, we should aim at reaching the goal under any circumstances. We should choose the best means and hurry to implement them, because experience, our lived lives Anubhūti अनुभूति, combined with common sense and sound reasoning, will be the sources of success. Before we can add to the goal a dimension of transcendence into the absolute divine plane, it is necessary to give to the goal the dimension of Good, in this world where pain and evil are omnipresent. In the eyes of a yogi or a clairvoyant, pain is everywhere on Earth. In fact, everything is intertwined with pain. Wealth, possessions, love, children, spouses, intelligence, youth, physical beauty, relative knowledge, all these aspects are closely related to the ephemeral nature of things, and thus to separation. They keep us in an illusory state Māyā माया. And they will be ground by the jaws of Kāla काल, the Time. All these aspects are the seeds that feed sorrow. They are not the goal by which we achieve the good. The real means to achieve the good are totally different. A magician will only show his trick to a limited number of people, because their knowledge and level of consciousness are limited. To obtain the truth behind the magic, they will need the help of the magician who will explain the trick.

Mankind is deluded by the covering principle of the great illusionist, that is the absolute universe. In the last conference, we talked in depth about the great illusion see conf. "The double spell" ). In order to escape this great illusion, we need to be able to initiate a trust-based relationship with the "Great Illusionist", that is the Absolute, so that he will reveal his law. Without his indulgence and cooperation, called the "divine grace”, all the means we will implement will be ineffective. How to obtain the divine grace so that it makes itself understandable to our limited minds? How would you obtain the grace of a person from whom you want attention? You would have to talk to this person with Love! This does not mean you have to talk to a creative god with a white beard, a creative god of the world with a beginning and an end. The omniscient Absolute, Brahman ब्रह्मन् in Vēdānta वेदांत, the nameless, formless, timeless Absolute, which contains everything, is both similar and totally different from the short-lived manifest agents acting in this world. We are unable to grasp its powers. The limitless nature of its manifestation gives us a hint of the limitlessness of its power. The cosmic order is maintained by the sovereign consciousness of this Absolute.

Human beings have a lot of trouble trying to maintain somewhat of a human order on this poor planet. The interests of the so-called sovereigns of our planet are tainted by inconsistency, injustice, mercilessness, avidity, manipulation... The Absolute is way above these stakes. It maintains the world order with its own inherent wisdom. It can be trusted when it comes to absolute. It is useless to pray to get something from it. We would fall back into our petty interests. Only selfless love, the disinterested recognition of a greater principle as the supreme consciousness, can be a shelter for what is the best in us. Human beings have always been praying this Absolute in different forms depending on the era and the world region. Whether Śiva शिव, the Sun, Muhammad, Jesus, Buddha बुद्ध, everyone defined the Absolute in one’s own way, and even gave it a body or a gross form combined with a superior consciousness. Indeed, one cannot have an encounter with an unconscious and disembodied god. The rudimentary intelligence of man has always had some trouble grasping this absolute of which disembodied nature is so completely different. So, man gave to some anthropomorphic representations very high qualities and powers compared to limited human qualities. The Absolute being omniscient, omnipotent, conscious of everything manifest and unmanifest, its body is located both in each part, as infinite as it is, of the manifest universe and in its unmanifest totality. Its body is made of absolute consciousness. Its absolute consciousness is the core truth common to the various conceptions of the divine. The entire immobile and mobile universe is reflected in these conceptions. The yogi should not direct his attention to these various and anthropomorphic conceptions or differentiated parts, but only to the transcendent form without its parts. Millions of rebirths would confirm this is the only possible way. In Vedānta वेदान्त, the absolute is Brahman ब्रह्मन्. In tantrism, the absolute is Lalitā Tripurasundarī ललिता त्रिपुरसुन्दरी. She is the mirror in which the Universe, both immobile and mobile, is reflected. The Universe seems to be separate from her, but in fact, it is not. She is the transcendence of everything. She is the supreme desire of the unmanifest to manifest itself, and conversely. She will give the grace of her understanding to those who turn their spirit to her. But before that, the yoga student needs to develop his intelligence and consciousness, reflection, control of the mental Manas मनस् and of the sense organs Tanmātra तन्मात्र. Most importantly, he needs to develop mastery of breath, the mental’s best friend, which, in turn, will enable him to develop Buddhi बुद्धि, the luminous intelligence. The true understanding of our manifestation here on Earth will come from the encounter between the luminous Buddhi of the yogi and the Great Goddess, who represents the unified principle of energy and absolute consciousness.

I will finish the year with a tantric verse: "By You, even He who creates, sustains and devours the world is put to sleep. Who is here capable of extolling You?" Hari om Tat Sat