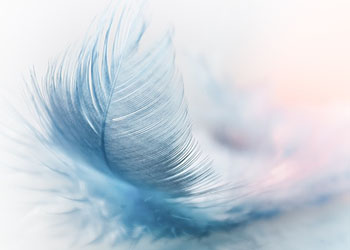 We are lucky to be able to practice together–for many years, for some of you–this wonderful science of Yoga. Even if yoga is often considered as a mere physical exercise or a relaxation method which is a bit folkloric, it remains a complex spiritual science with very high goals. Its main preoccupation is to allow man to become one with the universe. He will be able to do so by developing the witness state, by eliminating ego, by expanding consciousness, and last by recognizing the Absolute through the encounter with Ātman आत्मन् (the individual soul) and Brahman ब्रह्मन् (the unspeakable).

Yoga is of transcendental nature; this is its only goal.

If we want to experience the unspeakable, thus the unconceivable, we need to turn to superior and subtle aspects of existence. In spirituality, we will turn to what we define as such: the divine plane.

The many practices of yoga which aim at these high goals allow to work on:

transcendence of body and spirit through the awakening of a fundamental energy (Kuṇḍalinī कुण्डलिनी),

transcendence of intellect Buddhi बुद्धि through the higher Buddhi, the luminous intelligence, allowing the most acute metaphysical intellectual understanding and the perception of reality hidden behind phenomena. Manas and Buddhi allowing a complete inner change of the being,

the ritualistic aspect coming from the Vedic tradition allowing heart activation through devotion).

The goal of all these practices is to activate the divine plane in the aspirant.

As far as the ritual is concerned, the yogi interacts with the sacred either on the outside plane through Pūjā पूजा (ceremonies using objects, codified gestures, Mantra मन्त्र, offerings, blessing of the elements or of deities), or on the inside plane with meditative and contemplative practices. See conference "The Impact of the Sacred" & conference "The Vedic Ritual".

In the inner sacrifice, all physiological, energetic, and psychic functions will replace the ingredients of the ritual.

Yoga is a practical, mystical system, and consequently, frees from doctrines. Although it is distinct from religion, it is the subliminal and culminating point of Hindu practices.

In our patient work to awaken Kuṇḍalinī, here are the areas we are going to work on:

physical aspects through Āsana आसन, that is postural work,

techniques of visualization and activation of higher centers in order to obtain altered states of consciousness. But in order to support these sometimes very difficult practices, at the same time, we do some progressive, theoretical learning of the great principles that justify the meaning of these practices.

The awakening of Kuṇḍalinī is one of the most powerful practices of yoga, it is not a casual practice. So, it is important to regularly redefine its metaphysical dimension with you.

Yogis consider it as the royal path.

They consider the awakening of this cosmic energy to be the source of all powers. This incommensurable power sits in a latent state in each human being, in its retracted, dormant, underground form.

This conscious energy is at the source of two aspects that govern life: Prāṇa, the vital energy and its expanding nature, and Vīrya वीर्य, the vigor, the effective power of this Prāṇa. When these two aspects of vitality blend into a perfect balance (sāmarasya सारअस्य), there is a full realization of this unique and superior energy. This energy is a source of bliss when instinctual life is transcended and merged with conscious and spiritual life. So, Vīrya is the source principle that activates Prāṇa in any–visceral, artistic, mystical–form of creation. 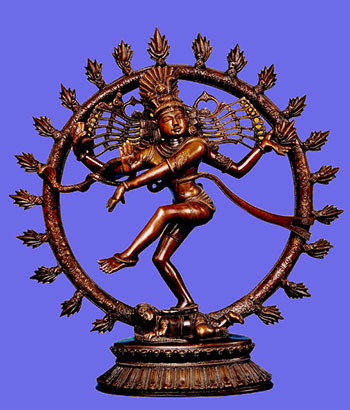 In the Tantric tradition from which the symbolism of the pair Śivā शिवा- Śakti शक्ति originates, Śivā is the consciousness and Śakti the fundamental energy. They are indivisible. The efficacy of Śivā शिवा is Virya. This capacity of Śivā is powerful enough to produce or reveal the effect of Śakti.

When Śivā comes into action to reveal this Śakti, he can be represented as Naṭarāja नटराज, the Lord of Dance. His free and spontaneous mystical dance takes place both in the universe and in the human heart. This dance is called Ānanda Tāṇḍava आनन्द ताण्डव, the ecstatic dance or dance of bliss. Represented this way, Śivā becomes the deity inspiring Bharata Nāṭyam dancers. This is a nod to our spiritual friend who is a dancer at the conservatoire and can’t be here this evening...

In this iconographic representation, Naṭarāja is represented standing on a lotus pedestal. He is the cosmic dancer in action. He is surrounded by a big circle of flames symbolizing the succession of cosmic cycles. Flames also represent all of the worlds that were destroyed by him when mankind brought chaos. He is the double principle of destruction and creation. His lifted left leg shows the dynamics of his present dance and the current preservation of the human world. His right foot stands upon the dwarf Apasmārapuruṣa representing human ignorance combined with forgetfulness of divine nature.

Like many divinities, he has four arms which represent the four Veda वेद. His lower right hand makes the mudrā मुद्रा called Abhaya अभय, gesture for protection and courage. With his left hand, he points to his lifted foot. His lifted leg symbolizes the hope of liberation Mokṣa मोक्ष obtained by spiritual realization. This gesture also means that there is the possibility that he may stop his cosmic dance by lowering his foot, throwing the world into nothingness and absolute silence, "the night of Śivā", if mankind brings chaos back again. In his upper right hand, he holds the Ḍamaru डमरु, the small drum, symbolizing both time and the hourglass. It also represents the cosmic rhythm and the creation of the sacred phoneme, initiator of the verb, the Praṇava प्रणव Aum औम्. This initial verb penetrates sleeping matter, Prakṛti प्रकृति, when after immemorial times of rest (Mahākalpa महाकल्प), it must be reawakened.

In his upper left hand, he holds the flame of the current world, symbolizing the god Agni अग्नि. Many of you know this symbolism as part of cosmogonic mythology. But we have to take this approach a little bit further.

Ḍamaru, the small drum, generates sound vibrations which give rise to time, space and the universe. Śivā carries along in his whirl the entire world. The movement of his dance conceals the essence of his unchanging and impassive nature and reveals Vīrya, his ardor.

"He makes the flames of the manifestation whirl around him. The fire, sweeping away everything, also reveals the manifest. He is the seat of all power. The dancer stands still at the center of his twofold activity of creation and destruction. He can unfold, with impassibility, the fiercest energies, the most antagonistic movements. He is simultaneously the principle of resorption, grace, retraction and expansion", says Lilian Silburn.

His energy, with whom he forms an indivisible whole, is nothing else than the great Śakti, the Kuṇḍalinī itself, the source of all energies, vibrations and rhythms in life. Its role is to propagate to the entire universe the rhythm of this cosmic dance.

Considered by yogis as the primordial vibration able to vibrate at a very high frequency, it creates all of manifested life, from the gross to the most subtle planes. It is of fundamental importance for the human being’s aspirations and capacities because of the ecstatic experience of the divine it can produce in him. Transcending the body, the sense organs (Tanmātra तन्मात्र), transcending the mind and the intellect, it only expresses itself through bliss, allowing man to vibrate in unison with the absolute universe.

As a primordial vibration, it is in everything. In undulating water, in the movement of wind, clouds, in bouncing light, it lies in the infinity of shades of this manifestation. Kuṇḍalinī, the cosmic energy, is present in all forms of vibrations on infinitely different frequencies.

Subtle, intense, energetic within a form, it is Spanda स्पन्द: that that vibrates. It is sphurattā स्फुरत्त when it becomes a luminous vibration. It is nāda नाद when it becomes sounding and resonant. It is all of this, in the outside manifested world, as well as in the individual form of man. With his cosmic dance, Śivā expresses the primordial rhythm of the divine which initiates motion in the universe. 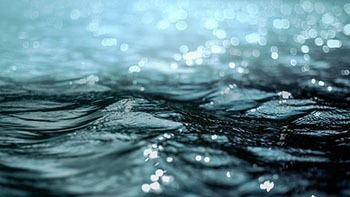 Given its unlimited nature, we seldom speak about the heart of the absolute. This heart of the absolute, sometimes called "divine heart", has in its center an etheric void, free from duality, called Kha ख (the void) and identical to Spanda, the initial vibration. All the worlds are born and die in it.

It is said: "From Kha surges forth the nondual state of bliss where one attains the initial and ultimate vibration spanda." "To attain the spanda" is to attain the efficience of the absolute, that is its capacity to be unchanging and unmanifested as well as to unfold into manifestation.

The dormant body is the dwelling place of sleeping gods. Awakening Kuṇḍalinī is awakening divine energies in us. This nondual, absolute awareness, combined with subtle and ultimate vibration are at the source of the ceaseless contraction and expansion of divine energies.

In summary: Divine heart (kha), initial vibration (spanda, energy), soaring (manifestation Prakṛti प्रकृति), fervor (Vīrya, capacity to act) and finally wave (propagation of life) are all of the aspects of this absolute consciousness.

On an individual scale, the mystical practice with a purified heart, lovingly giving a creative impulse to all that is living, allows the divine luminosity to restfully shine as well as Self-awareness.

How does this Kuṇḍalinī of unlimited and cosmic nature find itself in a retracted state in the human body?

The descent of this "undifferentiated consciousness-primordial energy" in the human body in the form of a "differentiated and dormant energy" happens through the progressive concealment that comes with the manifestation process. We are born as fetus and child before growing up. Physically, energetically, consciously, we are born concealed.

The cosmic energy, which emits the universe, reveals itself to the very edge of the universe. In humans, it does it in the form of the bound subject (paśu पशु). Man is chained to temporality (he is born but must die) and to the ignorance of his true origin Avidyā अविद्या.

In this process of progressive obscuring, the conscious and unlimited energy progressively veils itself to take on more limited forms. It loses its etheric nature to become tatva तत्व (the five elements), tanmātra, and to finally take the form of differentiated relative existence. In this way, concealing its unlimited and divine nature, it deludes the paśu bound to his relative life. However, these same energies, turned inward and sublimated by the powerful path of yoga and meditative practice, can reduce duality while unveiling the divine and subtle plane of undifferentiation. State that gives the supreme knowledge through the return of creative energy to its state of absolute consciousness. Kuṇḍalinī finally returns to its state of initial vibration, Spanda स्पन्द.